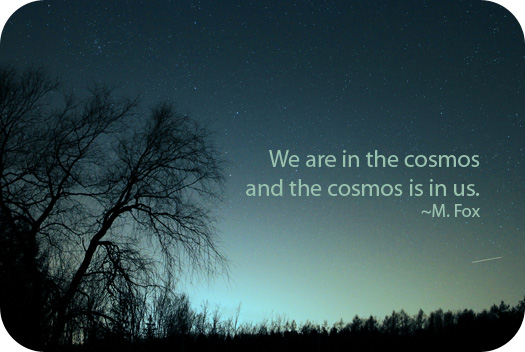 “Not too long ago thousands spent their lives as recluses to find spiritual vision in the solitude of nature.  Modern man need not become a hermit to achieve this goal, for it is neither ecstasy nor world-estranged mysticism his era demands, but a balance between quantitative and qualitative reality.  Modern man, with his reduced capacity for intuitive perception, is unlikely to benefit from the contemplative life of a hermit in the wilderness.  But what he can do is to give undivided attention, at times, to a natural phenomenon, observing it in detail, and recalling all the scientific facts about it he may remember.  Gradually, however, he must silence his thoughts and, for moments at least, forget all his personal cares and desires, until nothing remains in his soul but awe for the miracle before him.  Such efforts are like journeys beyond the boundaries of narrow self-love and, although the process of intuitive awakening is laborious and slow, its rewards are noticeable from the very first.  If pursued through the course of years, something will begin to stir in the human soul, a sense of kinship with the forces of life consciousness which rule the world of plants and animals, and with the powers which determine the laws of matter.  While analytical intellect may well be called the most precious fruit of the Modern Age, it must not be allowed to rule supreme in matters of cognition.  If science is to bring happiness and real progress to the world, it needs the warmth of man’s heart just as much as the cold inquisitiveness of his brain.”

OPEN YOUR MIND TO WHAT WE REALLY ARE:

WE ARE THE ONE – SONG

Evolution is a term to define only one organism and that’s the self. The self is the universe, the self is the alpha and omega, god, and infinity, and that’s the only thing that evolves because we are all part of the self. Nothing goes through an evolutionary process alone or without direct benefit to the whole. So when you begin to think that there’s this controlling elite, this controlling hand behind the curtains leading the planet to destruction…

When you think the end is near, the apocalypse, Armageddon, and when you think we as a species are doomed, it is not they, it is you that brought this about, and for a very good reason. You are evolving. Stop blaming everybody and everything else. Quit panicking about global tyranny and natural disaster and pay attention, because the world is telling you something; it’s tell you exactly what is wrong with you and how to fix it.

(Excerpt from the film)